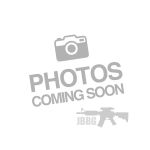 This ICS MGL Short Version Revolving Grenade Launcher is constructed from a high strength aluminium and is capable of holding 6 40mm grenade shells.

This ICS MGL Short Version Revolving Grenade Launcher is constructed from a high strength aluminium and is capable of holding 6 40mm grenade shells. This ICS MGL features a full rail system on the front of the gun which is perfect for a vertical foregrip, light or even a laser, also featured is a top rail for mounting of a red dot optic. A buffer tube with LE stock is mounted at the back of the launcher which is able to be adjusted to 3 different angles and 6 lengths. Two QD sling swivel points are located at the base of the buffer tube as well as a included rail mounted QD sling point on the railed hand guard of the launcher.

A latch under the back of the hand guard is used to open the revolving cylinder and allows quick access to reload your 40mm grenade shells. The revolving mechanism of the ICS MGL is operated by rotating the cylinder counter-clockwise and tension can be released via a small lever near the front of the cylinder assembly.

The ICS MGL is the latest in revolving grenade launchers and definitely stands out from the crowd.

This website uses cookies to improve your experience while you navigate through the website. Out of these cookies, the cookies that are categorized as necessary are stored on your browser as they are essential for the working of basic functionalities of the website. We also use third-party cookies that help us analyze and understand how you use this website. These cookies will be stored in your browser only with your consent. You also have the option to opt-out of these cookies. But opting out of some of these cookies may have an effect on your browsing experience.
Necessary Always Enabled
Necessary cookies are absolutely essential for the website to function properly. This category only includes cookies that ensures basic functionalities and security features of the website. These cookies do not store any personal information.
Non-necessary
Any cookies that may not be particularly necessary for the website to function and is used specifically to collect user personal data via analytics, ads, other embedded contents are termed as non-necessary cookies. It is mandatory to procure user consent prior to running these cookies on your website.
SAVE & ACCEPT
Open chat
TRIMEX UK
Hello,
Can we help?